This is a pretty neat wood-stove. You can't buy it in a store as it is shown because it was altered afterwards in order to be able to heat a water tank. Ah! Those thinking men who invented everything around you with more than two moving parts, eh?
. 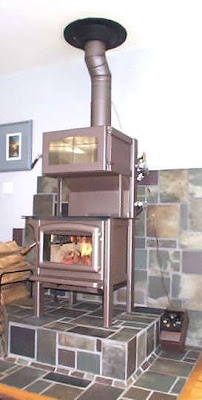 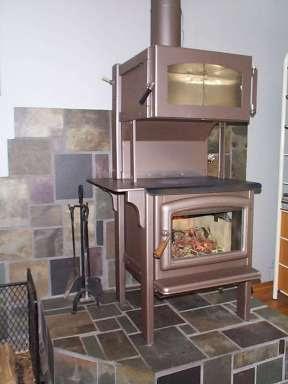 .
It sucks that geo-cities took down all of their websites, because that's what happened here. The guy who developed this stove had a pretty big write up on how he went about it all, including his mistakes and successes. If I remember correctly, this was his second go at doing this, as the first one was only moderately successful. Luckily, I had a few pictures saved.
. 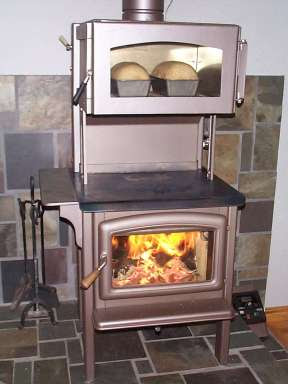 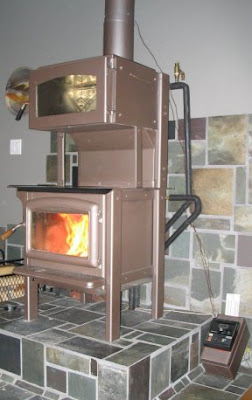 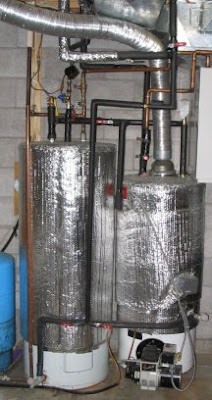 .
Do you see the pipes behind the stove in the second last picture? The water circulates behind the stove through them. I've seen a system like this before, but it was for heating a hot-tub. The new wood-fired hot-tubs have a sunken stove submerged in the water, but the first time I seen a wood-heated hot-tub was before those models came out. The one I seen had a wood stove outside of the hot-tub with two pipes leading to the hot-tub: one at the top of the tub, and one at the bottom. The whole hot versus cold thing caused the water to circulate itself. So, I am assuming that the fellow who designed this stove was working on the same principle.

I like the idea of systems like this. Even if you still had a conventional cooking stove run by electricity or gas, it would be nice to have such a back-up system in your house. Propane getting too expensive? Turn it off and use the stove!

I think you'd have to put a joey-shed or cooking porch off the side of the house in order to use this year-round though. I mean, who would want to fire up the wood-stove to make dinner when it is the middle of summer? I'm sure with a little planning (like a three-season porch), one could make it work - could probably attach some sort of blower to push the heat back into the house in the winter.

If you don't yet have a woodshed, you can set up a simple firewood shelter in the following way:

Pound two poles into the ground that accommodates the length of your woodpile and then find a piece of corrugated plastic to match its size, and cut two holes for the poles. As you remove the firewood, the plastic will simply slide down the poles while keeping your wood dry. 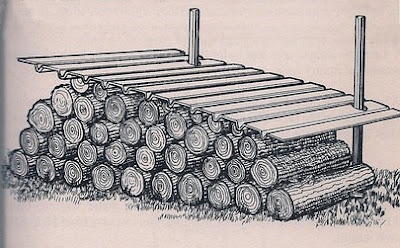 Email ThisBlogThis!Share to TwitterShare to FacebookShare to Pinterest
Labels: Off-Grid

Commentary On The World Out There

You are not God. Learn to observe without judging.
Show 25 Show All

INVEST IN GOLD
Show 10 Show All

Think Outside The Box